As a history buff that loves to learn about all things ancient, Pompeii has been on my list of places to see since I was young. Also, being a UNESCO World Heritage site, isn’t bad either as Pompeii is one of the most visited archaeological sites in the world.

Know Before You Go

Pompeii is relatively easy to reach from any of the Italian major cities thanks to the wonderful Italian train system.

Keep in mind that this is a ruined CITY. It is huge with streets, buildings, temples, brothels, villas, and much more. We spent a good 6 hours there walking and taking photos because I wanted to investigate and mentally capture as much as possible. Asking other tourists, most only stayed about two to three hours, getting tired easily navigating through the city over the cobblestone streets. It’s quite a hike day! Keeping all that in mind, you might want to seriously consider bringing a few items.

How to Get There

From Rome, take the train to Naples at the Napoli Centrale Station. From Naples, take the Circumvesuviana train. Follow the signs to the far back of the station, past all the shops. Go to the window and buy your round trip tickets and enter the gates right behind you to the platform. The Circumvesuviana trains run about every half hour and it takes about 30 minutes to arrive at your Pompeii stop, Pompeii Scavi.

Going to Pompeii is not very tourist friendly. Not like in most destination cities where they have clear markers and images of heavily visited sites. If you are ever unsure of the direction you are going, ask someone that looks like a tourist, as you are probably all going to the same place. That is always nice as well, as you can meet some amazing people from around the world.

Once you arrive it’s just a five minute walk to Pompeii site. Just follow the signs.

There are two sites of entry once you arrive. We walked straight ahead and all the way around to the far ticket office. I wanted to see the perimeter of the walled side, walk through the garden, and enter the city near the small theatre. If you are in a large group you can enter in the closer entrance near the staircase.

Tickets for Pompeii are 11 euro, cash or card. But being Italy, cash is always good to have on hand in case their machine is down.

There are no informational signs anywhere on site, so to learn more about the city, you can read a tour book or listen to a guide as you go. I much more enjoy wandering and looking up information rather than be stuck with a tour guide. You can also be sneaky and just loiter within listening distance near someone elses tour guide 🙂 This is actually sometime unavoidable as you wander and want to see the same sites as tour groups so you can just wait with them and gain from interesting knowledge for free.

Go to see the Roman Forum; the theater, the public baths, and the many villas.

The Forum served as ancient Pompeii’s main piazza and leads to many other notable sights, such as the Basilica built in the second century BC, the Temple of Jupiter which has one of the few arches that remain, the city’s Forum Granary and the nearby macellum, the city’s meat and fish market.

I loved to view the many bakeries, with the gigantic ovens and millstones with the complicated underground storage tunnels. You can see family restaurants and ancient roman homes with intact pipes that brought clean water into their homes!

See the infamous brothel, where you can find graffiti of satisfied customers near the frescoes that served as ancient-day advertisements. Keep an eye out for the not so subtle street advertisements that point you in the right direction as you wander. 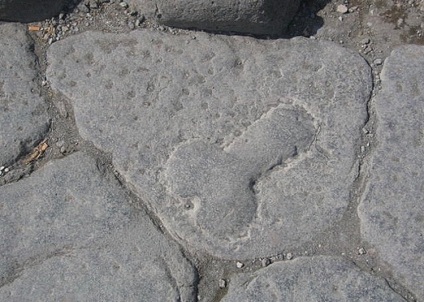 There are many villas and homes that really highlight the social class spectrum. Rich or poor they all lived next to one another. There were no socially constructed neighborhoods. See the: The villa of Diomedes,  the House of the Vetti, House of the Baker, House of Octavius Quartio, House of the Tragic Poet, House of the Faun, and many more.  View the extravagant rooms covered in frescoes, beautiful mosaics, and courtyards once filled with lush greenery.

Take a walk to the far end of the city to view the most haunting site, The Garden of the Fugitives. Overcome by the eruption, fugitives sought refuge near a vineyard. Here you will see the iconic plaster casts of the victim’s bodies 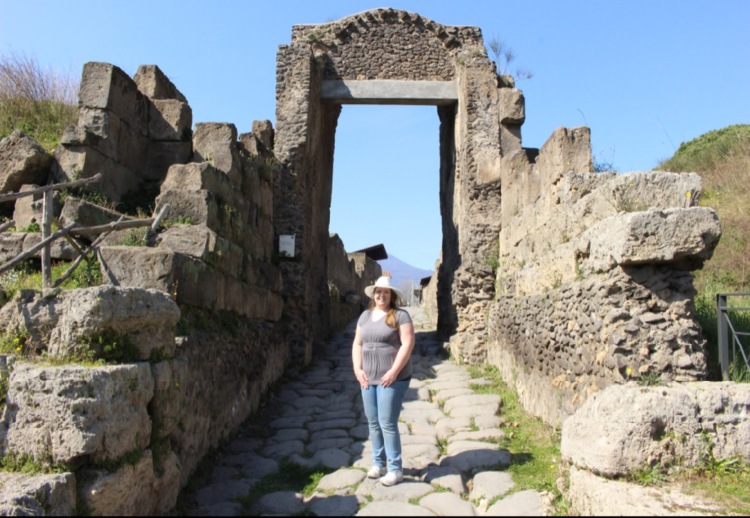 Continue to view the Necropolis with the funerary buildings and then navigate towards the home which houses the Venus in the shell.

Make sure the hanging mask on the side doesn’t give you nightmares. They are scary on purpose to frighten away evil spirits. You’ll find them a lot throughout ancient Italy. 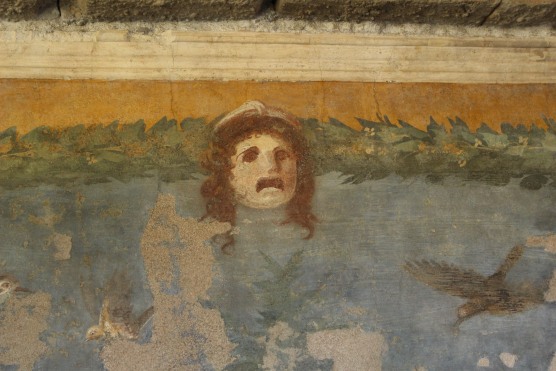 By far the best part of Pompeii is discovering the buildings themselves. Make an itinerary if you are short on time or use the guide. But if you are making a day of it, just wander and discover it yourself.

When you are ready to leave, walk all the way through the main streets of Pompeii towards the main entrance/exit near the Circumvesuviana train station . The reason I took the long entrance is so I could start at a quieter part of the city and end by taking one last photo of the city. 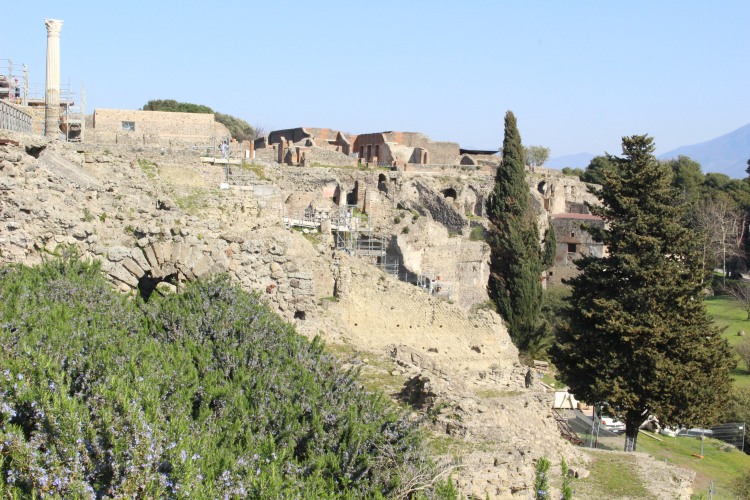 Pompeii is a humbling site. In the blink of an eye an entire city, along with the lives that lived there were devastated by the still looming Vesuvius. You leave in awe of the life that was lived there and, grateful for the  bittersweet gift that is Pompeii. Today it is still teaching us who these people once were.

These were once vibrant homes and businesses, farms and places of worship; and now the final resting place for many and an active archaeological site for us now.

When you visit, please be respectful.

More from my site

I’m Sarah and welcome to Still Packed; a space filled with stories, pictures and advice from my travel experiences.

I love travel. Yet, I am just like you; a normal person with a job and responsiblities. I make travel a priority and try to squeeze in global and local fun whenever I can.

I hope you find this bog useful with your own travel planning.